Key Biscayne is home to a number of venerable clubs and institutions that have animated our Island life for generations. Among them, the Key Biscayne Beach Club, founded in 1952, is the oldest and among the most treasured.

FOUNDING
In 1940, the Matheson family conveyed to Dade County the lands that became Crandon Park. This was part of an understanding that the County would build a causeway connection to the Island. In 1947, the Rickenbacker Causeway opened, and Key Biscayne suddenly became easily accessible and highly desirable. The Causeway Dedication brochure touted Key Biscayne as “… new Florida pleasure land – for the nation’s enjoyment – the realization of a pre-war dream, which transforms the sun-splashed beach of Key Biscayne far beyond the grandeur of Cannes, Nice or Waikiki.” Access spawned simultaneously fears about and a clamor for development – competing sensibilities characteristic of local reactions to development and re-development throughout the ensuing years. The focus on residential and resort development was not brand new in 1947, but with bridge access, development was more feasible – probably inevitable – and in short order Key Biscayne morphed from a working plantation to a real estate boom-town.

The Matheson family retained lands comprising the middle of the Island after the Crandon Park conveyance. These lands, corresponding roughly to the current Village, were sold to developers; most notably the Mackle brothers – Frank, Elliott and Robert — who paid $25 million for 220 acres in 1950. The Mackles conceived of Biscayne Key Estates, a subdivision development totaling 553 three-bedroom, 1,100-square foot houses within a new subdivision plat, much like suburban developments then changing landscapes throughout the United States, but with a distinctive amenity: the promise of beach access within easy walking distance. The Key Biscayne Beach Club was the fulfillment of this promise.

Sales were good at Biscayne Key Estates and a real community soon formed on Key Biscayne. Meanwhile the formation of the Beach Club proceeded on its own pace. The Mackle developers appointed the first Beach Club board in 1951 – Edwin Underwood, President, Tom Butler, VP, Harvey Elwood, VP, D.H. Curtis, Treasurer and Mrs. Harry Vernon, Secretary – and set on the task of acquiring a beachfront site for the Club. The desired site was still owned by the Matheson heirs, and although flush with sales revenues, the Mackles lacked the ready capital to buy the beachfront land. Instead, the Mackle-led Beach Club Board approached Investors Diversified Services (IDS) in Minnesota, seeking a loan to support a purchase from the Mathesons. Instead of a direct purchase, the parties arranged for a long-term lease, and in January 1952, the Key Biscayne Beach Club, Inc. acquired a 99 year lease of the Club property, for $1 a year and with an extension option. Then, on June 13, 1952, the Club’s initial 250 family members were invited to the new Club property for a free hot dog roast; the first in a long and continuing tradition of Beach Club celebrations.

MEMBERSHIP AND GROWTH
Mackle Brothers home buyers received complimentary Beach Club membership. This was a serious sales incentive, inasmuch as Club membership initially was open only to home-owners within the originally-platted Mackle subdivision. The Club’s initial roster of 250 members in 1952 grew organically with the Island’s residential growth. By 1958, the Club had 705 members, who contributed an extra $75 to help fund the construction of the Club House. The initial Mackle-only membership limitation was softened over time, and today, all Key Biscayne residents can join the Beach Club. The singularity of the Beach Club for ocean access changed with the advent of multi-family properties east of Crandon Boulevard. But the Beach Club has nevertheless remained the first-choice warm and welcoming social mecca for many hundreds of Key Biscayne families, now for four generations.

THE CLUBHOUSE
Constructed in 1958, and inaugurated on January 28th, 1959, The Key Biscayne Beach Club clubhouse is a prime example of the Island’s mid-century development, and one of the last of its era still in use. The building was designed by Miami architect Robert Fitch Smith, the first Dean of the School of Architecture at the University of Miami, who also designed a number of respected churches, schools and other civic and commercial structures. Notable for its functionality, and its low-scale, appealing presence on the site, and for its sturdy construction, the clubhouse has weathered the corrosive oceanside environment and at least five major hurricanes. The clubhouse floors, with embedded shuffleboard layouts, are the original terrazzo installed in 1958. The kitchen is brightened by its original blue tiles also installed in 1958. The floors remain in excellent condition despite being submerged under 4 feet of wet sand after Hurricane Andrew in 1992. The porcelain water fountain is also original from 1958 and is still functional. Anecdotally, the fountain is said to be the first public water fountain in Key Biscayne; reserving for the possibility that Ponce de Leon found an earlier version – the Fountain of Youth – in 1513. If walls could talk, imagine the stories of many weddings, parties, reunions, civic gatherings and fundraisers, not to mention the daily discourses of a wide-circle of Beach Club friends.

CUBAN MISSILE CRISIS – THE BEACH CLUB DOES ITS DUTY
Along the north property line of the Beach Club one finds a structure now serving as a storage building. Well, in October 1962, that structure served, in an admittedly minor role, as an asset supporting our national defense. As the Cuban Missile Crisis was unfolding, the U.S. Navy approached Muriel Curtis, the first woman manager of the Club, seeking to build an enclosure for a power transformer for Fowey Light. With the Beach Club’s patriotic assent, the Navy built and equipped the structure, running a cable from the Beach Club to the lighthouse 6 miles offshore.

WINTER WHITE HOUSE AND “CAMP DAVID SOUTH”
Like Key Biscayne generally, the Beach Club has always been an egalitarian community, serving and served by members occupying various stations in life. Characteristically, there’s not a lot of discussion, and possibly not a lot of awareness, about another club member’s occupation. A notable exception was former President Richard Nixon. After years of regular visits, in late 1968 Richard Nixon acquired property on Bay Lane, and in 1969, he became a member of the Key Biscayne Beach Club. Nixon’s friend, Charles G. (Bebe) Rebozo, lived next door to the Nixon property and was a Beach Club member from 1968-1974. Another Presidential friend and Beach Club member, Robert Abplanalp, bought the property at 478 Bay Lane, which became the Secret Service’s headquarters during President Nixon’s visits. The Bay Lane compound became known as the Winter White House, which Nixon would frequent throughout his tumultuous presidency. A “Watergate” file in the Beach Club’s records includes a photo of President Nixon at the Beach Club, along with a congressional order directing the Beach Club president to appear before the Senate Select Committee on Presidential Campaign Activities in 1974. Although it would be a stretch to conclude that the Beach Club featured prominently in the Watergate investigations, it was on the Senate Select Committee’s radar. And, the anecdotal record indicates that President Nixon and his confidantes found pleasant respite at the Beach Club during the Nixon presidency.

CHICKEE HUTS
With allusion to our indigenous Island forbears, the Miccosukee chickee huts have provided shelter and shade since the 1960s. They are built with thatched palmetto leaves, supported by cypress poles. The originals were damaged by Hurricane Irma and have since been replaced, making use of the same construction and materials.

MEMORY BRICKS AND CONTINUITY
Evidence of past and present are seen in the brickwork plaza surrounding the flagpole. Key Biscayne families honor their pioneer parents and grandparents who created Beach Club memories and legacies for their progeny. The relatively famous and relatively anonymous alike denote by brickwork inscription their abiding affection for and connection with the Beach Club. The surnames of many long-time families reflect something of a living history of Key Biscayne, and the growing number of engraved bricks demonstrates that the Beach Club’s present and future is much like its past in garnering strong ties among members.

Speaking of continuity, this past year demonstrates that planning and change can be accomplished in a manner consistent with Beach Club traditions, so as to perpetuate and even enhance the Club experience. Some changes are more material than others. As an example, in 2019 Mike O’Brien retired as Beach Club manager, a position he held continuously since 1989.

Now, Paul Zuccarini has succeeded Mike O’Brien as manager, working with a new Board, under newly revised bylaws, with an eye toward upgrading Club facilities and services. The clubhouse facilities are freshened up, with a new coat of paint, a new roof and shutters and doors, new bathroom fixtures, new chairs and umbrellas, playground improvements, attractive new signage, a fully renovated office and landscaping improvements. Work is ongoing with a first-class caterer for a new food and beverage concession, to be housed in a newly-renovated kitchen.

The Beach Club has been and continues to be a center of Island life. Having hosted the 60th anniversary of the Key Biscayne Community School a few years ago, and a national Key Rat reunion last year, in two years, the Beach Club will celebrate its 70th anniversary. You can be sure it’ll be quite a party, like so many others during the entire span of Key Biscayne’s history as a residential community. 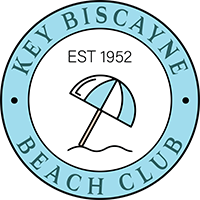