In 1950, Bebe Rebozo invited a friend and former classmate, U.S. Senator George Smathers, to go fshing off Key Biscayne. Joining the expedition that day were three of Senator Smathers’ colleagues, Senators Richard Nixon, Jack Kennedy and Lyndon Johnson. This early example of presidential visits to Key Biscayne also began Nixon’s decades-long connection with our Island Paradise, where he maintained a residence on Bay Lane for many years. Key Biscayners became used to the Secret Service presence, highly recognizable by their colorful tropical print shirts, and the comings and goings of government offcials and Nixon family friends. During the 1960 presidential campaign, then-Vice President Nixon used Key Biscayne frequently as a campaign base and a refuge from campaign burdens, much like Senator Kennedy did at his family home in Palm Beach. In the days after the 1960 election, PresidentElect Kennedy came to Key Biscayne to meet with Vice President Nixon. They discussed the election, the transition to a new administration and the future. Although not quite foreseeable at that time, that future included President Nixon’s own administration, substantial elements of which played out at the Winter White House on Bay Lane.

In October 2017, Father Bob Libby, former rector of St. Christopher’s By-the-Sea Episcopal Church and a founding member of the Key Biscayne Historical and Heritage Society, brought to life President Nixon’s years on the Key in a very personal, anecdotelaced talk in front of a gathering of about 100 participants, including some oldtimers who shared their own memories. Drawing on many photographs from the Nixon years, compiled mainly by Bob Bristol, another founder of the Historical and Heritage Society, Father Libby related intimate stories about Mr. Nixon and his years on the Key from our purely localized perspective. Touching on Nixon’s and Rebozo’s long friendship, which continued until Nixon’s death in 1994, as well as Nixon’s affection for President Kennedy and his very close relationship with his wife Pat, Father Libby used stories and photos to call to mind the unlikely juxtaposition of presidential pomp and circumstance in our highly informal Island Paradise. 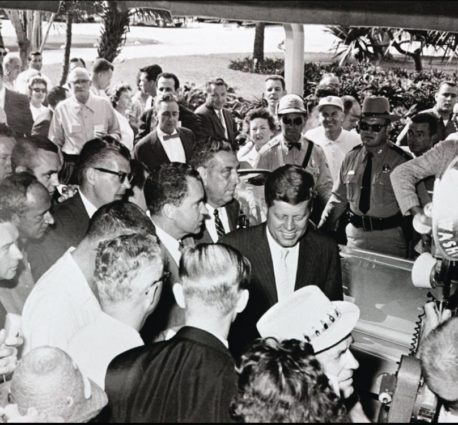 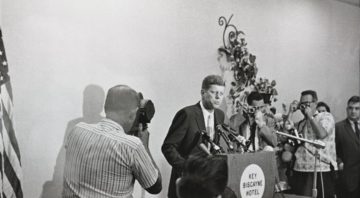 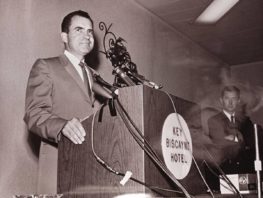 A sampling from Father Libby: Secret Service agents, resplendent in Hawaiian print shirts and earpieces, whose arrivals alerted locals of the impending presidential presence, galvanizing supporters as well as protestors. Dick Vernon opening the breakfast counter at his pharmacy early in the morning to serve President Nixon and Bebe before the breakfast rush. Harbor Plaza shopping center closing down to enable the president to shop at the ﬂorist to buy ﬂowers for Pat. Don Pedro giving Secret Service agents haircuts.

A disappointed Vice President Nixon dining at the Jamaica Inn the day after the 1960 election, where, according to Father Libby, he received phone calls from President Eisenhower, J. Edgar Hoover, the attorney general and JFK. “The frst three were encouraging Nixon to contest the election, because there had been some hanky-panky in Illinois and in Texas.

But Nixon said that would take a year, and whoever was in the White House would be powerless. And because of the Cold War, Nixon said, ‘I don’t want to put the country in danger,’” Libby recounted. Opting not to challenge the election, Mr. Nixon joined President-Elect Kennedy at the Key Biscayne Hotel for a private meeting followed by a press conference.

Fast-forwarding to the presidential years, Father Libby related a story about President Nixon interviewing soon-to-be-designated Secretary of State Henry Kissinger on Key Biscayne. When Willy Brandt, the Chancellor of Germany, visited the president on Key Biscayne in 1971, Nixon asked Key Biscayne native and Chowder Chompers founder Tommy Sykes if the Chowder Chompers would ride by the president’s compound playing O Tannenbaum. Father Libby also spoke about President Nixon being on Key Biscayne when the Yom Kippur War broke out in October 1973. From Bay Lane, President Nixon directed American planes to support the Israeli Air Force. Father Libby related how during a very tense time, with American forces supporting Israel and Soviet troops supporting the Egyptians and Syrians – and with Israel hanging in the balance – American intervention emanated from the Winter White House on Bay Lane. Later, following the Vietnam War peace treaty, Nixon rang the “Freedom Bell” at the Key Biscayne Presbyterian Church to symbolize the end of the war.

The Historical and Heritage Society gathering revealed how dynamic Key Biscayne was for Nixon, personally and presidentially. Local sea captain Jim O’Neill remembered chartering boats for Rebozo, Nixon, Nixon’s family and a slew of distinguished visitors. The son of Burns Men’s Shop owner Mike Ruben remembered President Nixon’s visits to his dad’s store. On one occasion, Mike recalled, his father reached into his pocket for a measuring tape while f tting a shirt for the President, and was immediately seized by Secret Service agents who, following their training, interpreted any reach into a pocket as a threat.

Apart from his entourage, much of President Nixon’s time on the Key was pretty regular. Nixon liked to attend the Presbyterian Church and the Community Church and did so regularly. The late Dick Cromartie, a founding father of the Village of Key Biscayne and namesake for our local American Legion chapter, was no fan of the president’s politics, but was impressed when Nixon approached him at the Presbyterian Church after hearing of Dick’s valor on Iwo Jima. “Nixon thanked him,” Father Libby said. Nixon went to the Community Church often. One day the pastor saw him walking the beach with his pants rolled up and a coat over his head. According to Father Libby, the pastor introduced himself, and Nixon told him, “I appreciate the fact that you keep the door of the church open. When I come back from campaigning I’m usually all strung out, and I go and sit in the church for an hour or two to calm down.”

Nixon liked to be by the water. He enjoyed walking the beach so much that the Secret Service created a private beach area behind his Bay Lane property – the Nixon Beach we know today. The Secret Service also installed a torpedo net to protect the president while he swam. Father Libby recalled Secret Service advice to Bill and Sandy Earle, whose home was at the end of the presidential compound: “You’ve got to be careful – if you go skinny dipping, or hanky-panky in the pool, the minute the water splashes, the lights and the sirens are going to come on, so you’re going to have to behave yourself.”